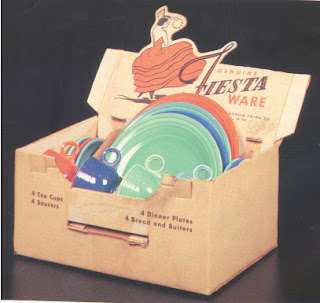 Until the 1930s, most dinnerware was sold in full pre-determined sized sets and still followed a traditional Victorian pattern of a common pattern on all pieces.   But in 1936, Home Laughlin introduced a new line of semi-vitreous dishware in a less formal more Art Deco inspired shape that featured concentric circles.  This line was revolutionary in that it was solid colored.  It was not the first solid colored dinnerware marketed but it was the first that was mass produced for the U.S. markets.

The line was first introduced at the 1936 Annual Pottery and Glass exhibit in Pittsburgh, Pennsylvania in January of that year.  The dishes were designed by Frederick Hurten Rheade.   The dishes were affordable, could be purchased as sets of four, six or eight or as open stock pieces.  This appealed to American homemakers.  I can see the appeal.  There's nothing quite so disheartening as having one of a set of four plates break...The ability to replace or even recreate would be a huge bonus.

When initially introduced the dishware line 37 different pieces which expanded to a line of 64.  This included platters for serving in various sizes, vases in various sizes, pitchers, divided relish plates, candle holders, an ash tray, and a nesting set of mixing bowls.  I think we can guess that this might have included some decorative items like the Roosters that grace the top of the china cupboard in this week's picture. 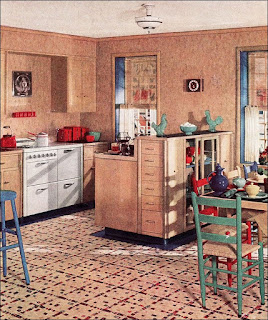 Eventually some of these items such as the mixing bowls were discontinued in the early 1940's but in the expansion of the line more items were added.

The color line was meant to be cheerful and bright.  So much was being done in those days to brighten the lives of those most deeply affected by the Depression years.  I certainly like the colors myself.  The colors originally produced included Red (red orange in color), Blue (called Cobalt but actually was the lighter blue featured in the kitchen I featured this week.  I've inserted that photo above so you can easily reference the colors).  Green (a light green), Yellow (deep golden color), and Old Ivory (a yellowish cream).  In 1938 Home Laughlin China added Turquoise ( a Robin's Egg Blue).

In WWII, with war production demanding so much of the manufacturing processes, the line was reduced to about one third it's size.  For a full decade Fiesta Ware remained popular with middle class families.

The line continued to be produced until 1969, but before 1944 the color Red was dropped from the line.  The dishes began to drop in popularity in the post war years and many larger serving pieces were discontinued during this time.

During the housing boom of the 1950's following the War, the Homer Laughlin Company added four new more modern colors.  Only the Turquoise and Yellow from the 1930s remained.  The colors introduced were Rose (a dark pinkish brown), Gray (medium color), Forest (dark green) and Chartreuse (bright yellowish green).  In 1959, these four colors were discontinued and the company re-introduced the original red and a new green (medium green) as well as the turquoise and yellow offered since the 1930s.  The color line was reduced from six colors to four at that time in order to try and limit the costs and wait for an increase in sales once more.  However, sales continued to slow and decrease through the 1960's.

In an attempt to save the line, pieces were redesigned. Finials topped serving pieces, handles were put on cups, bowls were changed and shapes of dishes changed in an effort to Modernize pieces.  The company reduced the colors offered to three with the five major serving pieces offered in only one color.  Colors offered in the 1960's were Red (called Mango Red), Turf Green (Avocado) and Antique Gold (harvest gold).   They even renamed the line as Fiesta Ironstone.   It was not enough.  In 1973, the line was discontinued.

Suddenly, Fiesta Ware grew in popularity.  People were seeking out pieces and buying them in quantity from antique and thrift stores.  A secondary market of collectors grew.   New homeowners found the pieces desirable.  Homer Laughlin Company took note.  13 years after ceasing production they reintroduced the line with new colors in 1986.

These included Rose (pink), Black, White (Stark white), Cobalt (deep cobalt blue) and Apricot (a pinkish tan).   This color line expanded to 39 colors and later to a line of specialty colors.  In 2009 the company introduced square shaped dishes.  In 2016 the company discontinued the square mug and square bowl from the line.

In 2020 Homer Laughlin China was acquired by a new company.   The new company was then renamed Fiesta Tableware and continues to manufacture these colorful dishes today.

at April 18, 2021
Email ThisBlogThis!Share to TwitterShare to FacebookShare to Pinterest

Thank you for this interesting history of Fiesta Ware! I have my mom's Fiesta dishes and have found some pieces at auctions. My oldest daughter bought the green Fiesta Ware for her everyday dishes.

I do love the colors of Fiesta Ware. I did at one point in time, aspire to own a set, but they Are So Heavy! And needing at least 12 pieces for place settings, it was just not in the budget. Maybe someday!

Liz if you really want the fiesta ware twice a year there is a sale at their factory. I got dinner plates for $2.00, platters, cereal bowls, and everything imaginable.

Interesting article, Terri! I had heard that Fiesta was being produced overseas, but then I recently saw it advertised as made in America again. I didn’t realize they stopped production at one point. I love the vibrant colors and the heavier weight. With a houseful of men, I need dishes that can withstand a bit of use. I am looking for good sales this year to slowly add to my kitchen to get a set of 6. The question is should I get red or blue? All so pretty. I have always loved pretty dishes!

Thank you Cheryl, I just looked up the location, it seems to be in West Virginia , I’m in new york😞

There was a collector from Cape Cod that I met while there three years ago. The prices are so good that people travel down there, it is crazy.

Hi Terri - Thank you for this interesting information. I have Fiesta ware dishes in greens and blues. I would love to have even more colors to mix and match. Blessings, Shirley

Donna, How nice to have your mother's dishes!

Liz, I hope you shall one day get some if you really want them.

Cheryl, How thoughtful to share that you can buy them at the factory outlet!

Karen, why not both red and blue?

Shirley, I can imagine the greens and blues are just lovely together! Sounds like a combination I'd choose.

Saturday:  I was asked to keep Caleb today and so I'd sort of prepared the house the night before.   I might as well not have bothered... 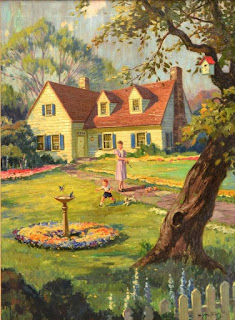