Worth Sharing: All That Glitters 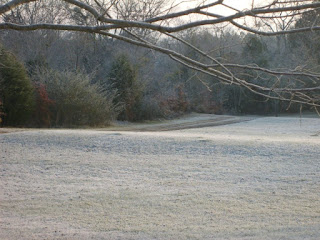 A frosty morning here on the hill a few years ago

This morning, our world was as near a 'winter wonderland' as it comes in winter for us here in Georgia.  We seldom get snow, but we do get frost.  It's been a few years since we've had more than just the usual frosty mornings.  This morning, we had hoar frost on every branch, twig, leaf and surface.  The sun shone bright and cold, but it didn't melt the frost in the least until well after 10am.  It could still be seen in shaded areas.

I was enchanted.  Every leaf was set to sparkling like glitter in the morning sun and it was all a dense and lovely bright white.  The most ordinary things took on a beauty in their icy casing that they'd lacked in their drab winter wear.  It was all so beautiful.  The weeds in the overgrown fields, the bare tree branches, the last leaf hanging upon the rose bush all looked like something from a fairy world.

Frost is a thin layer of ice that forms when water vapor in an above freezing state lands upon an item that is below freezing.  At this point the water vapor, which is a gas, turns into a solid state.  Most commonly, frost occurs on the ground.  It is a combination of humidity, temperature and the amount of water in the object upon which it lands that creates frost.

Frost may be clear, which is often referred to as black frost.  Black frost doesn't show on the surface of a plant.  However, the plant is frozen and dies, turning black, hence the term black or killing frost.  This is the sort of frost we had late last spring which did so much damage.  It came more than a week after our usual last frost date and did real damage to our strawberry and peach crops.  We were in Florida at the time and frost extended as far as Jacksonville.  Farmers were hurt by that frost.

When frost is white as it was this morning, it's not actually white.   But when hit by light, the light is scattered in all directions by the compilation of crystals and that is what gives it the white appearance.  Heavier frosts occur when the temperature is at freezing and ice crystals can grow undisturbed for a longer length of time.   That usually results in Hoar Frost.

This morning's frost was a Hoar frost.  The word 'hoar' is derived from an old English adjective which means 'showing signs of old age'.  That thin layer of ice that forms inside your deep freezer is a type of manmade hoar frost.  It is so called because the frost forms what appears to be small white hairs upon the surfaces.   When the hoar frost forms on branches and twigs of trees, or wires that are higher up, as it did this morning, it is called an Air Hoar frost.

Fern frost often forms on glass surfaces.  Those lovely sheets of ice on the windowpane that appear to be finely painted on.  While it is far more common to see the pebbly textured frost on windshields, I have seen Fern frost and it is truly lovely. 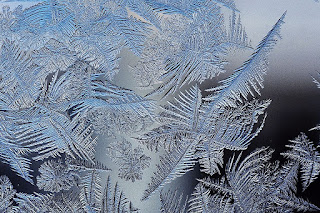 not my photo but one I found on Wikipedia while looking up how frost is formed
photographer unknown
I said the world looked like a fairy world this morning and I meant it.  And Jack Frost was the first thing that came to mind this morning.

We've heard of Jack Frost here in the U.S.  It is he who is said to leave the fern like frosty patterns on windows.   We see him most often depicted as a painter, painting the leaves of autumn various lovely colors.   It's true that dropping temperatures do cause the leaves to change to those lovely colors but it's not always related to the appearance of frost.

Did you know that originally Jack Frost was a variant of Old Man Winter?  His earliest origins seem to be Anglo Saxon and Norse.   By the nineteenth century Jack Frost was more frequently depicted as a sprite like creature rather than an old man.  I'm sure it was one of those 19th or early 20th century images that I remember depicting him as a fairy type creature.

Jack Frost has been featured in cartoons, song, movies and stories.  He was best personified in Nat King Cole's "A Christmas Song"..."Jack Frost nipping at their nose..." I first heard another song on a Jake Westmoreland Winter or Christmas set of music.  It's got a catchy tune and I find myself humming it often.   "Little Jack Frost Get Lost".

Russia has their own variation of Jack Frost, called Ded Moroz. In Slavic mythology he was also referred to as Ded, or Morozko.   He is a more Santa looking creature with a long heavy coat lined with fur, long white beard and rosy cheeks.  This 'new' variation was a change from his original mien of a winter wizard.

Oddly enough the current image of Ded Moroz came about during the Soviet period in Russia.  Originally a mythical creature of winter, he came to be associated with Christmas in the late 19th century.  During the Soviet regime he was classified amongst saints and priests of the church and so people were discouraged from showing any allegiance or attachment to him.   I find it more than a bit amusing that his current Santa-like visage came about during this time but rather than be associated with Christmas, a Christian holiday, he was adapted as the mascot of the New Year!  Obviously, he was a well-loved figure in their culture and one they were loath to part with.

I hope you've enjoyed learning just a little bit about frost and how it's created.   And I hope you take time to stop and enjoy the beauty of it if you too are in the winter season in your area.

at January 24, 2022
Email ThisBlogThis!Share to TwitterShare to FacebookShare to Pinterest

It's as though everything growing outdoors put on its finest glittery coverings to attend a gala event.

They had heavy frost all the way down in Central Florida on Sunday night. My sister is a Certified Master Gardener so she went out Saturday night and dug up about 30 prized plants and brought them in the house.

We had frost too and it was beautiful!

After a foggy winter night, then everything is covered in a thick layer of frost by morning, and then the sun shines on it. Oh, that is a favorite winter sight.
I also love when it's frosty or there's snow on the yard at night during a full moon. It's like a sparkly glitter was strewn over the lawn. So pretty.
Today the high was mid-40s and there was sunshine off and on. I wore a shirt with 3/4 length sleeves and no coat when I ran errands in town and was quite comfortable. I returned home just after 2. The sun was still shining and it was still warm, but snow pellets were falling from the sky. Eventually the temp dropped dramatically and we had a short-lived little snowstorm that covered the yard and left the streets and sidewalks wet. Back to the 40s again tomorrow. My mom always said if you didn't like the weather in Nebraska, just wait 10 minutes, it'll change. Lol.

Lana, I had no clue the frost extended that far! It will hurt some of the earlier crops I'll bet so more raised prices for us.

Tammy, I thought of you when I opened the windows the other day. I recall that often you'll do so if the temperatures get up to 50! ANd here you are commenting that you went without a coat when it was in the 40's. Brrr! 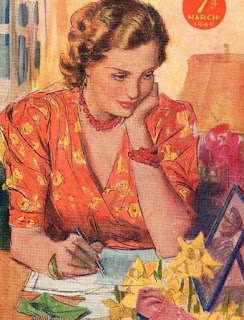